Breeding is an important topic in livestock production and farming. Though some livestock farmers don’t value breeding, it remains the tool to improve the animals on your farm. Breeding is a very broad topic, but for this purpose of this post, everything will be made brief, but inbreeding and crossbreeding will be extensively discussed.

What is Breeding in Animal Production?

Animal Breeding is simply the application of genetic principles to enhance or improve the production efficiency in farm animals.
There are two basic systems of breeding. They include:

Inbreeding is the mating of closely related animals together. It is further classified into two groups:

Many livestock farmers don’t know which breeding system is the best. In fact, some farmers just mate their animals, not minding the breed or family of the animals they are mating together.

The reasons why inbreeding is bad (disadvantages of inbreeding) are as follow:

Inbreeding is only advised if a livestock farmer:

So if you’re ready for business and you want to have quality and high performing animals on your farms, you must avoid mating animals of the same or related parents together. If possible, purchase your animals or starting stock from different sources. You must also keep breeding record of every animal on your farm.

In a situation where you are confused, or you need professional guidance, don’t hesitate to look for a professional or experienced animal breeder to put you through. The most important thing is to avoid inbreeding and always practice crossbreeding as recommended by breeding experts.
Please note that crossbreeding is not the only recommended breeding system, but it is the most common and most straightforward of all. There are other modern breeding systems but just stick to one recommended in this post. 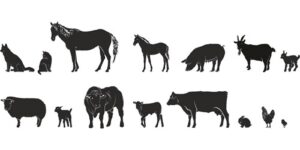