Generally, in the animal kingdom, except in higher primates like apes, bamboos, etc., female animals have a particular period when they willingly allow mating with the males. This period is known as the heat period or estrus period.

What is Estrus or Heat?

In simple words, heat or estrus is a recurring period when a female animal is fertile and sexually ready to mate or be serviced. Servicing in animal husbandry is the act of mating between male and female animals.

Estrus is very important in animal breeding. This is because it is the period that reproductive physiology and endocrinology (hormone) of the female animal are ready for reproduction. The fact is, if heat doesn’t occur, there would be no pregnancy.

There are many reproductive physiological processes occurring in a female animal’s body. During the heat period, the Graafian follicles are ripe and the ovum (egg) is getting matured before it ruptures (ovulation). The heat period terminates with ovulation. Heat periods don’t last long in animals. Different animals have different estrus lengths and different estrous cycles.

When a female animal is on heat, there are some observable signs that the animal shows. These signs are what a livestock farmer or breeder needs to use in determining if it is time to introduce a male to the female animal or inseminate her. There are uncommon occasions where a female animal doesn’t show any sign of heat, but fortunately, the male animal would detect the readiness of the female. So, that is why it is good to have teaser males among your animals. A teaser male is a male that is sexually sensitive but cannot impregnate because he is sterile and cannot produce sperms.

What are the Signs of Heat in Farm Animals?

To know if an animal if sexually receptive or fertile, the following signs would be detected:

If a livestock farmer has female animals that don’t show the signs of estrus or heat, such a farmer has to introduce teaser males to them in order to know when the female animals are ready to be serviced. The above signs are very visible in mammalian species like cattle, goats, sheep, pigs, horses, camels, and donkeys. 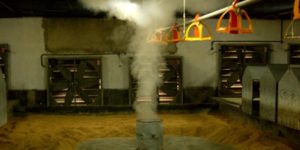