What is Hydroponic Fodder?

Hydroponic fodder is animal feed grown from seeds without soil, and with little water. A week after the seeds have sprouted, the nutritious seedlings will be up to 30 cm tall. They can be produced every day of the year, even in the dry season. Reduced availability of grazing land and scarcity of water to cultivate fodder makes it hard to produce green fodder throughout the year. Hence, one can take advantage of hydroponic fodder.

How to Grow Hydroponic Fodder?

Within a week, 1 kilogram of maize seed produces about 8 kilograms of fodder. Remove the tray and cut the slab of fodder into pieces. Give the animals half hydroponic fodder and half-dry fodder. If you want to read more about Hydroponic Gardening, visit this website farmstocking. 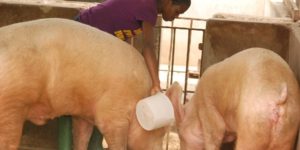 2 thoughts on “What is Hydroponic Fodder and How Can It Be Grown?”