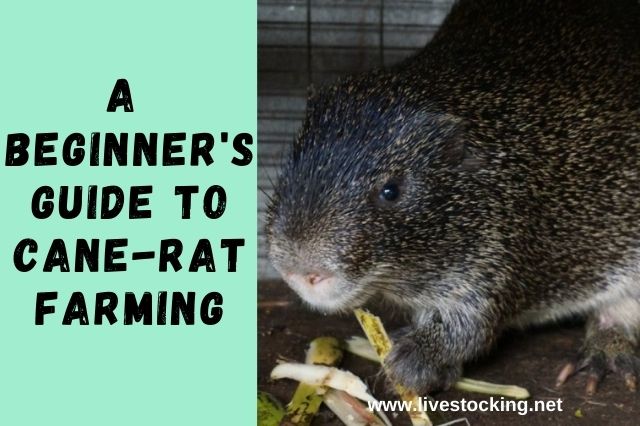 Grasscutters or cane rats are a popular choice for meat in many West African countries, and they are beginning to gain popularity in other parts of the world as well. Grasscutter farming is a very profitable enterprise, and it is not as difficult as you might think to get started.

In this blog post, we will discuss the basics of grasscutter farming, from choosing a site to setting up your pen to breeding and raising the animals. We will also offer some tips on how to sell your grasscutters for the best price.

Grasscutters (Thryonomys swinderianus), also called Cane Rats and Grass Cutter in English-speaking West African countries, Agouti in French-speaking West African countries and hedgehogs in Central Africa, are rodents that are widely found in wet or grasslands areas in Africa. Though these animals are widely hunted in Africa, they can be domesticated like other micro-livestock animals such as rabbits.

Some characteristics of grasscutters are:

How to Breed or Raise Grasscutters

The best way to breed grasscutters is by raising them under an intensive system, i.e. keeping them in cages or pens inside a very safe shed. It is very important to choose a very good location as this is highly critical for successful grasscutter rearing.

Other conditions that must be met for a successful grasscutter rearing include:

Also Read: 6 Reasons Why You Should Raise Grasscutters or Cane Rats

There are various materials used in constructing the rearing shed of grasscutters, Breezeblocks, bricks, straws and bamboo that can be used for this purpose. It is always advised to use local materials to reduce construction costs.

It is mandatory that the building have adequate light and ventilation. The long sides of the pen must be low-walled (1.5 meters high) and the upper half can be covered with a chicken net. Corrugated iron or other waterproof materials can be used for roofing the rearing shed.

How to build a grasscutter house, pen or cage

Grasscutters are commonly kept and raised inside rearing pens. It is the production objectives that determine the number of pens to construct. One breeding female per pen is recommended and the floor space per adult grasscutter is 0.2 m2.

A grasscutter pen setup could be:

The pen’s construction materials determine the layout of the pens. Brick pens are fixed and unmovable while metal pens are movable.

Using wood, bamboo or straw to construct pens for grasscutters is not recommended because the grasscutters can eat them. Rearing pens can be opened or closed, and when constructing, it is important to have passages to move around between rearing pens.

There are two types of pens for grasscutters. They are Open Pens and Close Pens.

These are enclosures that are not covered at the top and they have a surface area of 3 m2 and a height of 1.5 meters. The pens have openings in the side that facilitate access for the farmer to move in and out of the pens.

These are enclosures that are covered at the top with some appropriate roofing material. These pens may be partitioned into compartments. The surface area could be between 2-3 m2 and a height of 0.8 meter.

If two compartments are created, they should have the same surface area. They should also be separated by partitions and have a 15 cm opening for free movement of grasscutters to and fro the compartments.

Feeding and Drinking Troughs for Grasscutters

These can be constructed with clay or cement but should be heavy enough for the grasscutters. This is to prevent the animals from knocking the troughs over. The farmer can personally construct the troughs by molding them out of wood or metal. One trough should be for three grasscutters.

A squeeze cage is used for easy handling of grass cutters. It should have dimensions that are the same as the animal to be handled. A squeeze page can be made by building a rectangular cage with fine-meshed screening. When constructing this cage, the average weight of the animals and variety should be considered. It shouldn’t be built in a way that the animals can turn or move about inside the cage.

Some basic facts about grasscutters with regards to reproduction are as follows:

In grasscutter production, random selection should be avoided. You should procure the best animals from the nearest breeding center or another grasscutter breeder. Additionally, when making your selection, it should be based on body weight.

Note: Don’t move the male to the female pen because it may result in to fight and mating may not occur. Also, avoid mating a male that is lighter than the female in weight.

There are two mating options in grasscutter farming:

Both permanent and temporary matings have their advantages and disadvantages.

The gestation period for grasscutters or cane rats is 152 days. After your male and female grasscutters must have mated with each other, it is necessary to check if the female is pregnant.

4-8 weeks after mating, carefully insert a cotton bud into the genital of the female. If it changes color to red, then that grasscutter is pregnant. If there is no discoloration, then the female is not pregnant.

Newborn grasscutters resemble adult ones. Within a few hours, they can move around. After the female has delivered, she must be provided with enough feed and water for adequate milk production.

You should wean your newborn grasscutters 40 days after they are born. This is necessary because any extension will make the mother grow weak due to prolonged breastfeeding. When weaning, separate the males from the females. You can identify a male grasscutter by distancing the genitals and anus, which are twice as large as those in young females.

The feeds or foods that are given to grasscutters should meet all their daily nutritional requirements. Since the grasscutters would be in captivity, their diet should consist of majorly green forage, but fresh or dried food could also be provided. They can also be given concentrates rich in energy, proteins and minerals.

Feeds and Feeding in Grasscutter Farming

Grasscutters need a balanced diet daily. The green mistake some grasscutter farmers make is giving their animals only green forage. That is one of the reasons for the slow growth and low milk production in nursing female grasscutters.

On the other hand, if they are not fed with green forage such as grasses or legumes, they would suffer digestive problems. A balanced diet would produce an average weight of 3.5 kg and 2.8 kg in male and female cane rats respectively.

Some of the forage and concentrates that grasscutters could be fed with as presented below:

Importance of Conserving and Storing feeds

Conservation of feeds and stocking the feed barn is another aspect of grasscutter farming that should be considered. The fodder for the animals should be air-dried or sun-dried and kept in a dry place. Planting and cultivating fodder could be done to have sufficient fodder in the period of scarcity.

Concentrates should be stored in a dry place and avoid storing them for long. This is because concentrate feeds are very sensitive to changes in humidity, temperature and oxidation. It could also be attacked by insects, rodents, mites, bacteria, fungi or mold.

Health management is very important in all aspects of livestock farming. As a grasscutter or cane rat farmer, the health of your big rats should be very important to you because if they come down with diseases, you would be spending additional money to combat those diseases. Of course, your cost of production is increasing. To protect your grasscutters from diseases, the following measures should be done:

How to Identify a Sick Grasscutter

To know if a grasscutter is sick, there are some observable signs you will see. These include:

See below for some problems and possible solutions

If you have read the guide above and you need detailed information about starting grasscutter farming or how to raise grasscutters or cane rats, download the eBook below. You will really find it helpful.