Listeriosis is a serious contagious bacterial disease that affects many different species of animals, including goats, sheep and cattle. It can cause severe health problems in goats, including abortion, pneumonia, encephalitis, and death.

Listeriosis in goats and cattle occurs either in an abortion form or a nervous form. In the abortion form, it is asymptotic and causes only abortion in a pregnant host.

In the nervous form, the symptoms include:

The bacteria are known to be hardy and can be found in the following:

While the bacteria can be easily destroyed or killed by common disinfectants, they are capable of surviving in soil, urine, feces, etc. and other living tissues for five years (or more). Wild birds and mammals are suspected to be the primary carrier of listeriosis bacteria on a farm. The organism will then persist on forage grasses and legumes, in soils, feed and feed bunks.

There are predisposing factors for listeriosis in goats and cattle. They are:

Treatment, Control and Prevention of Listeriosis

Listeriosis has no cure, especially for small ruminants. This is because infected goats, cattle or sheep often die after coming down with the disease. In a situation where there is a listeriosis outbreak on a farm, the first thing to do is to isolate all infected animals. If the animals are fed round bales of hay or silage, it should be discontinued.

To prevent listeriosis in goats and cattle, high-level biosecurity measures should be taken. Any newly introduced animals must be quarantined. All areas of the farms and equipment which include the sheds, pens, floors, feeders, waterers and feed bunks must be thoroughly cleaned and disinfected.

Listeriosis is a zoonotic disease; hence, extreme carefulness is required to avoid being infected. This includes: 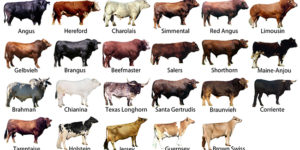