What is Molting and Why Do Chickens Molt?

Molting or moulting is the process where chickens naturally shed of old feathers to regrow new ones. Molting is not a strange thing in poultry production. It’s a natural process that all chickens go through every year. The reason for molting is very simple. Firstly, chickens molt or moult in order to replace or replenish their feathers. Growing of new feathers is necessary for chickens as it allows them (chickens) to regulate their body temperate easily and efficiently, particularly those in colder regions.

When Do Chickens Molt?

It’s worth mentioning that chicken will go through the molting process many times in their lives. Juvenile molt, a term for the first molt in chicks, occurs when chicks are 6-8 days old. During the juvenile molt, chicks lose their fluffy feathers to replace them with real feathers. The second juvenile molt occurs when male chickens are about 8 – 12 weeks of age. This is when the ornamental feathers grow. The first molt in adult chickens occurs when they are 18 months old. The molting process in this stage last for 8 – 12 weeks—although there are some that molt for as long as 6 months.

What are the Types of Molting in Chickens?

Furthermore, molting in adult chickens can either be soft molting or hard molting. In soft molting, the molting process is gradual. That is to say, the birds lose their feathers slowly and you would find it difficult to determine if the birds are molting. On the other hand, hard molting is dramatic. The birds lose their feathers fast, making them look rough or naked.

What are Molting Triggers?

There are a number of molting triggers in chickens. Some common triggers for molting in chicken include:

What are the Effects of Molting on Egg Laying Performance?

Have you ever wondered why spent or old layers don’t lay eggs while molting? Now, this is what happens: When laying chickens are going through the molting process, they usually stop laying eggs. This is because both egg and feather production cannot take place at the same time. That is the reason why chickens stop laying eggs or have a significant reduction in egg production when molting. After they have grown new fathers, the egg laying process will start again.

How to Help Chickens Recover Quickly from Molting

Poultry farmers must assist their birds going through a molt by providing them with additional protein. The normal crude protein of layer feed is 16%, but this should be increased to 20 – 25% when layers are molting. The reason for this is that chickens use protein for feather production, and the more protein available to them, the quicker they are able to come out of molting.

Apart from cessation or reduction of egg production, molting has other disadvantages. The birds are susceptible to pecking or cannibalism because of their naked or exposed skin. The birds also feel uncomfortable and wouldn’t want to be handled during the molting period. 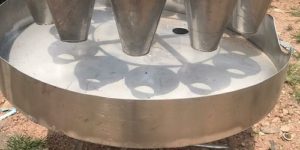 1 thought on “Molting in Chickens: Everything You Need To Know”