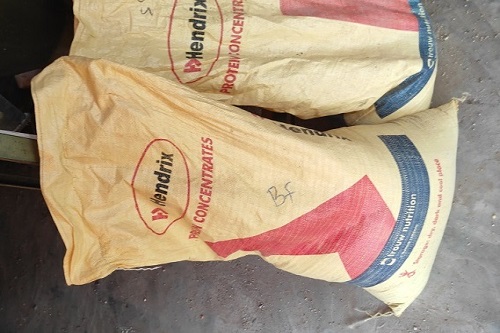 In this era of rising chicken feed prices and low-quality feed, many poultry farmers are already looking for alternatives. One of these alternatives is milling the feed themselves.

Using concentrates is one of the ways to reduce the cost of feeding or save costs on feeding your birds. Concentrates are incomplete feed that needs to be completed with some other ingredients such as maize, soyabean meal, wheat offal, groundnut cake, etc. This is however based on the manufacturer’s recommended or personal preferences.

As a poultry farmer, I have discovered that using concentrate to produce feeds for chicken is quite cheaper than buying ready-made feed. Even the results on chickens are quite impressive and sometimes what you get when you used readymade complete feeds. I will discuss this later in this article, but for now, I’ll talk about the price of Hendrix concentrates and the mixing ratios.

Where to Buy Hendrix Concentrate

Hendrix concentrates and other feed products could be bought at livestock feed outlets in Nigeria. Their feed mill is located in Ibadan, Nigeria. If you plan to buy in bulk, you can reach out to me.

How Good is Hendrix Broiler Concentrate? A Personal Review

Well, I have been using Hendrix broiler concentrate since February 2021 and the results achieved after 6 weeks of production have been great. Although, I got more impressive results when I started using the pre-starter pellet feed. Please note that I raised only Arbor Acres broiler strain and have not tried Hendrix broiler concentrate with other strains like Cobb, Ross or Marshal.

You might want to ask: what is the average weight you got when I used the broiler concentrates? The average live weight of broilers raised with Hendrix broiler concentrates is 2.3 kg after 6 weeks and there are broiler chickens that weighed up to 2.8 kg among the flock at this period. With the Arbor Acres broilers fed with feed formulated with the above mixing ratio, the feed conversion ratio (FCR) is 1.85.

The mortality rate was around 3-4% (this rate could be due to the quality and source of the chicks and may not really be the feed). There were no serious leg problems and less than 1% of the whole flock suffered lameness or other leg issues.

In terms of palatability, the chickens consumed the feed well. However, since it is not in the pellet form, the feed intake is low and a bit of feed wastage. Hence, if you have a pelletizer, it will increase feed intake, enhance growth performance and minimize feed wastage.

I recommend Hendrix broiler concentrate and if you want to get better results, feed your broiler chicks with the pre-starter for 7-10 days before you switch to the normal broiler starter.

If you have other questions on this topic, kindly ask them through the comment box.